Our own experience has been through learning languages to immersion way. The educational goal in Colombia to learn English for everyone is on the basis. Nowadays, children that don't have the same opportunities like children who live in the countryside barely have an English class properly. So we thought that with our own experience we can help them.

The story: Is based on a real story, about a school teacher named Luis. He lives in the countryside. Every day, he visited children at home with his donkeys, which carry books from library. He teaches children with them.

Educational goals: The target is children from 6 to 9 years old. This animated program is to support the teaching process. Teaching English to children, in a friendlier manner, as a second language. The material of teaching English comes from different country such as USA,UK, etc. We found the content is not familiar to children and this is an issue for their learning.

Example of one of the episodes 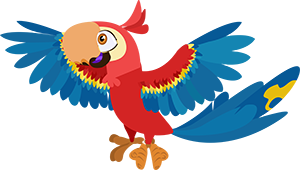 It begins with Luis, the real one, from the video, who is coming to the country farm. When he meet children, the animation part continues.

The animated Luis, reads a story from book about macaws. The macaws are like pets in the Colombian countryside. So the story is about the name in English of the parts of the body of the bird. Also, the story has specific grammar: The prepositions. While he teaches under the trees. In the top there is a Macaw, which is kid’s pet. The next day, the pet have been disappear. Only he let a trail of feathers.

Luis invites children to learn how to find the macaw from the best detective of the world: Sherlock holmes, who is an hologram character in the “secret library”.

The way that they go to this library is moving the ear of one of the donkeys. Suddenly the “hologram door” opens.

At the door there is a mouse, who ask children a specific question about prepositions. Children are wondering about it and invite the audience to think about it. When children answer the question. They go into the library to meet Sherlock. He teaches children how gather clues.

So the children in the animation are ready to find the macaw. They have to complete puzzles of the bird, find the hidden object in the jungle.

Finally, Luis and his donkeys help the children to save the macaw from the animals traffickers. In the meantime, the macaw says to children where he is, using place prepositions such as under, above,etc.

Finally the children will be able to use prepositions in a correct way.

The government has an educational plan for teaching English. They know that people that understand English as a second language have an advantage and that they could be very competitive. Regrettably, the access to learn English has been limited to those with a higher economic status. Less than 1% of the Colombian people speak English as a second language. Of course, Colombians would like to see bilingual next generations. Until now, one of the most common ways used to teach English to children has been through foreign content books or TV shows. But because of that, children from all over, especially from the countryside, don't understand very well. Had the content been adapted to their environment and culture, they would have been taught better than before. This kind of animated content helps the teaching process. 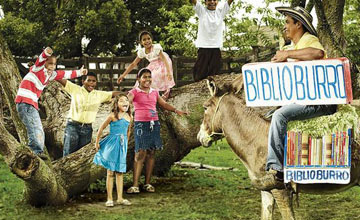 Biblioburro, as a project, has existed for 20 years. It is widely known in this part of the countryside. Some generations of children have been taught with him. Nowadays, he begins to use digital devices too. He has a youtube channel. He has empowered children. A couple of years ago, he started with “Biblioburro very nice”, an English teaching program. But he doesn't have a lot of teaching material. So, we have decided to take the next step as a content in English, because the rest of the topics (maths, geography, literature, history, etc) in Spanish are already in the digital content of Biblioburro.